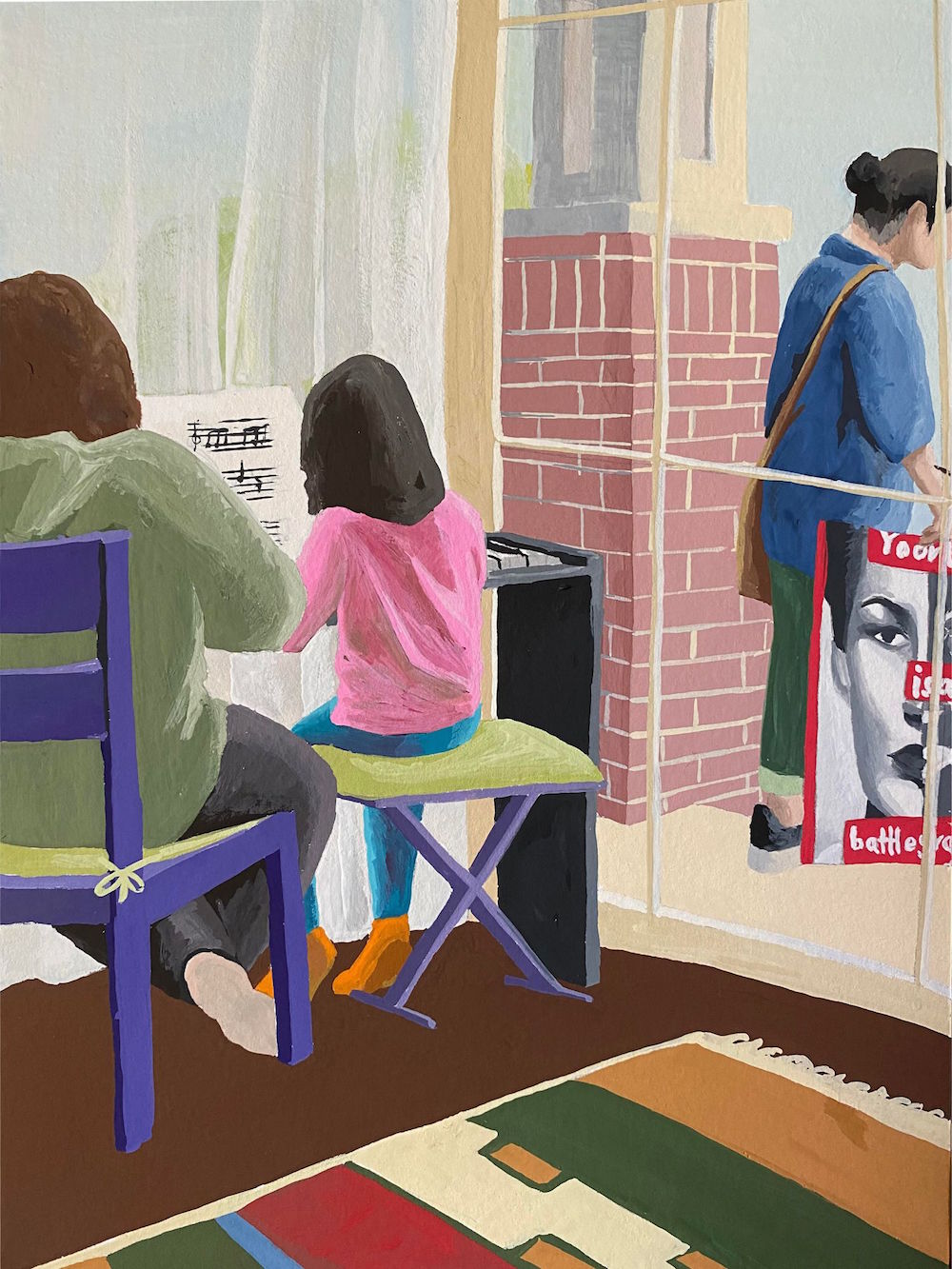 Katayoun Vaziri, Memories of a Bourgeoisie: The day that Roe v. Wade got overturned (Tribute to Barbara Kruger), 2022.

Vaziri conjures postcard-sized, atmospheric scenes, focussing on an interplay between people and environments. Her practice exists in a finely tuned space. Works are thoughtful, created with an iconic, reduced visual language. Interactions are distilled into simplified, concentrated scenes. Timeless. She draws on a variety of cultural references, questioning social narratives, and political ideas. Her works are brimming with empathy and understanding. Refined, playful, yet critically engaged. The interplay of leisure and labour. There is a duality between the calm, ordinary scenes depicted, and the rebellion and disillusionment in their message.

Subjects are often anonymous. Frequently telling the stories of people that are suffering, Vaziri ensures she keeps “the dignity and privacy of those involved.”  In a capitalist society, many ordinary people grapple with socio and political inequalities. Ordinary people often choose between dreams and survival. Moreover, the artist notes that depicting a face can create an immediate judgement around an appearance. Her faceless depictions ensure viewers understand them as human – without prejudice. This was a seemingly subconscious decision, born of the artist’s exploration of emotional availability. This anonymity is understood in a variety of ways. Some figures face away; some are cropped from the scene; some are humorously hidden. In Memories of a Bourgeoisie, Labor Day Weekend in America (Tribute to David Hammons), one figure leans out of frame, another holds a cigarette over his eyes, while another is masked by a beer glass. “I make jokes a lot.” Vaziri quips. 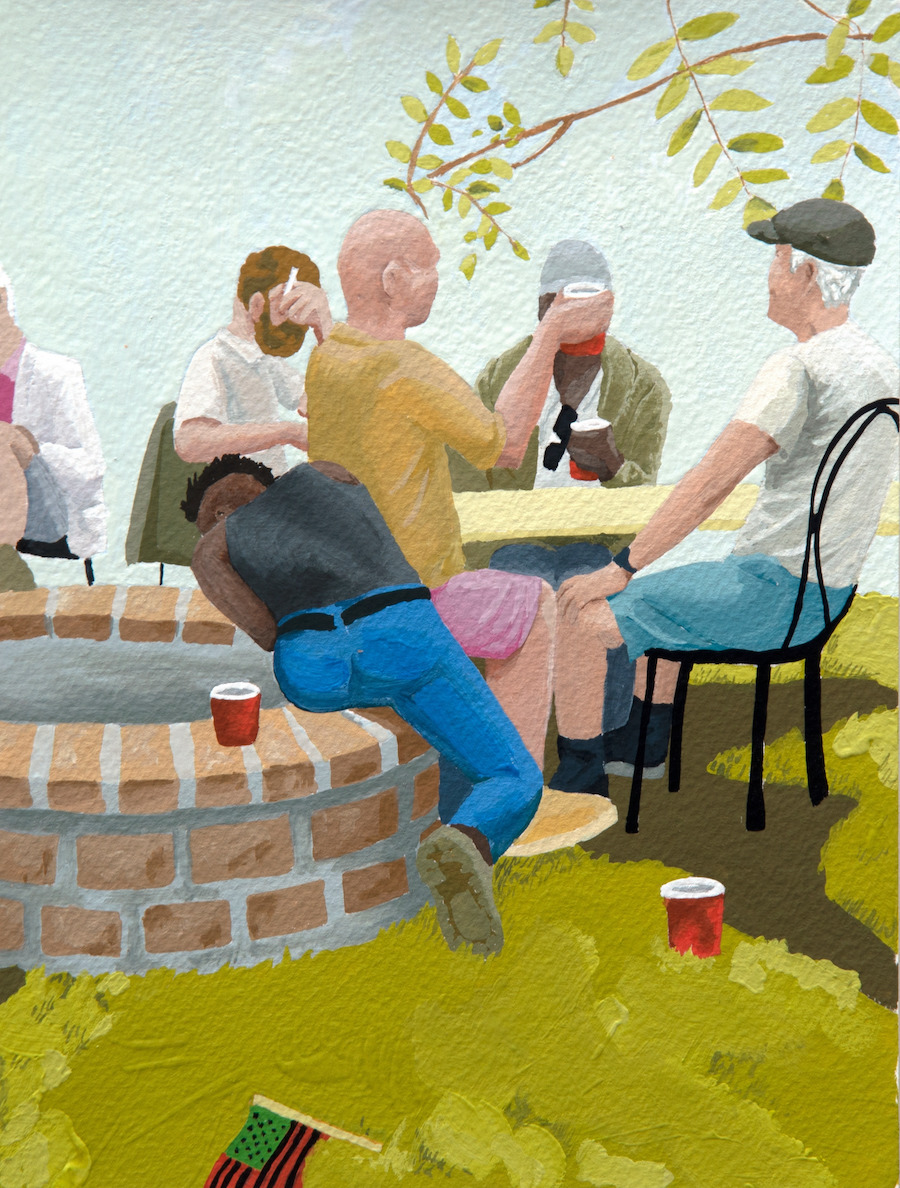 A key marker of this humour is the juxtaposition between the traditional and contemporary. Memories of a Bourgeoisie: The day that Roe v. Wade got overturned (Tribute to Barbara Kruger), sees an ordinary woman lean a priceless Barbara Kruger artwork on the floor. Here, it is reminiscent more of an Ikea print than a work estimated at over $700,000. Vaziri’s work sits at an interesting juncture of art history, and there is a clear impact of its legacy. In Memories of a Bourgeoisie, The Third of May 2020 (Tribute to Goya) we are presented with a figure exercising desperately. She star-jumps in front of Goya’s The Third of May painting. The freeze-frame pose of the subject mirrors the central figure in the work. This figure is not exercising, but being executed. Here, Vaziri uses art history to comment on society, and the sometimes futility of modern life. There is a discourse presented on modern feelings of inadequacy. The introduction of historical works not only acts as an incredible exercise for Vaziri’s practice, but also provides an entry way for people who recognise them.

Many works begin with photography – street and portrait photography that remains private to the artist. This itself is a commentary on a perceived lack of privacy in a digitalised world. Photographs are taken on her own phone. She is mesmerised by the everyday scene the phone captures. As such, the works exist as a moment in time. There is seemingly no comment made by the artist in the depictions. The scene that actually happened. A truthful snapshot. This is important to Vaziri, who believes in the importance of telling a story effectively, truthfully, and of giving agency to the people involved – she doesn’t change the narrative. Instead Vaziri picks the moments that raise the questions.

Vaziri is no stranger to the art world. She has returned to painting quite recently – The 6th August 2016 to be exact – after a voluntary leave from the wider art community. This return was gradual, and considered. Her “new journey started by observing [her] daily life and that of [her] surroundings, while assessing [her] role… in its economic and political structure.” She rekindled her passion for painting on Sundays. She calls these her Sunday Paintings, brought to regularity during lockdown. These have acted as a personal diary. After this return from the art world, her style changed greatly. She found a real trust in herself, beginning to confidently depict humans. Where she had previously disliked her work, this major shift was far more personal and connected. Now, her works are produced in a multitude of series, including her Memories of a Bourgeoisie Series, her Repetition Series and many more. These works have vital things in common, making them iconic of Vaziri’s style: depicted in a palette of bright, airy colours; a postcard scale; and a careful composition, hiding the sitters’ identities.

Vaziri has committed to make no monetary gain from her practice and sale of works. This is a continuation of her social engagement. The artist’s proceeds from the sale of her artworks are donated carefully and thoughtfully to vetted community building organisations.

For any further queries regarding these causes, please contact us at newcube.art.

Born in Tehran, Katayoun Vaziri now lives and works between New York City and Mexico City. In 2009 she graduated from Yale University with an MFA in Painting. She has exhibited in a variety of group and solo exhibitions internationally, including London, Mexico City, Dubai and New York. Vaziri has been invited to participate in prestigious residencies, such as the Skowhegan School of Painting and Drawings in Maine and Eyebeam in Brooklyn. Currently, Vaziri’s works are included in a duo project/exhibition entitled A Possible Fantastical Narrative alongside artist Mookwon Han at FOYER-LA. This fall, Vaziri will be included in a much anticipated exhibition at the ASU Art Museum, in Arizona.

With the rise of a new generation of art collectors around the world and equally the rise of social media, our team at newcube has met inspiring and passionate patrons of the art, some of whom have yet to reach their thirties. Each with their own unique stories and itineraries in the art world, young collectors like Alex Abedine have built close relationships over the years with leading galleries and promising emerging artists.

The newest generation of collectors: a...

newcube spoke with Edwin Safa, a young collector whose passion for artists of his generation has led him to build a prestigious art collection.

Artists on our Radar

Whether you are looking to add to your collection or looking for inspiration—or just something new—gathered here are a group of female artists from diverse backgrounds and with disparate artistic practices that we’ll be following closely—and can’t wait to see what they do next.